In order to have an IUI (intrauterine insemination) there are instructions, (like all things dealing with infertility), that make it a pretty stressful situation.  First, Luke and I have to make a decision at the beginning of each cycle whether or not we are going to do an IUI that month. The reason? To call the hospital ahead of time and let them know we are planning on coming in that month.  Second, I have to use ovulation kits to test when I’m ovulating.  Okay, no biggie, right? I have done this plenty of times before.  However, now… it is different…  Before, I could test in the privacy and comfort of my home.  But during an IUI month, I have to test in the bathroom of my place of employment. But, why?!  Well, for scheduling purposes at the hospital of course!  And, they instruct us to test starting on cycle day 10, so I have to do this each day starting cd10 until I get a positive LH surge.  In order to schedule an IUI, I have to call the hospital on the day of my positive LH surge to let them know we would be coming in the morning.  Here’s the kicker though – we have to call before 3:30pm.  So, if I get an LH surge when I get home from work after 5pm, we are out of luck for an IUI that month – since the deadline for scheduling for the following morning has passed.  Therefore, I test at work at 2:30pm to hit their deadline for scheduling.

Peeing into a cup, testing that pee, and waiting 5 minutes for the LH surge results is the most nerve-racking thing to do at work.  First of all, I have to somehow take the cup and ovulation test into the bathroom without anyone seeing… Then, I basically have to be in the stall for what feels like an eternity, hoping that no one comes into the bathroom or notices how long I’ve been in there. And finally, I leave the bathroom with the test strip hoping I don’t see anyone (because I like to compare test strips on cycle days for different months)… Every time I do this, it feels like “Mission Impossible”…

The first time Luke and I went to the hospital for an IUI, we really didn’t know what to expect.  I mean, we had an idea of course… but we walked into the hospital together holding hands tightly, saying, without using words, “I’m nervous”.

Our first IUI went like this: We drove separate, per the nurse instructions since Luke had to get to work ASAP. We arrived at 7:45am.  They called Luke back and he did his part.  When Luke came back to the waiting room he handed me a pager.  And not a small, concealed pager… a pager that made me feel like we were at the Olive Garden or Texas Roadhouse waiting for a table. So, yea, it was huge… and I was confused. He said, “They’ll page you when they are ready for you. They said 1-2 hours and you can go anywhere in the hospital.” Hmmm okay. Luke was reluctant to leave me, but I knew he had to get to work. So we hugged, kissed and said goodbye and I went to the hospital cafeteria with my “restaurant” pager in hand.  Luckily, I had packed my laptop in my bag just in case I had time to remote in and work.  So I worked and waited, and waited, and waited.  About an hour 1/2 later, the pager started spazzing out I tried to turn it off, but it wouldn’t stop.  It was loud and vibrating… And I had to take it to the waiting room I was at before… on a different floor in the hospital… carrying the spazzing pager.  (embarrassing!) When I got there, I was SHOCKED to find out that the next step wouldn’t be done there.  No, in fact, I had to carry a small tube carrying my husbands semen to a whole nother clinic in the hospital. “Okay, I’ll just put it in my purse” … “No no – you can’t do that. You need to carry it in your hands (for heat) and make sure it stays upright the whole time.” …….Um, excuse me? Oh man……… this is way more awkward than I had been planning for… I made it to the women’s health center in the hospital without running into anyone I knew. (PHEW!) Then I checked in and waited… all the while holding his semen in my hand (upright!)… This was definitely not something I had planned on or expected or been READY for. I should have just been wearing a sign that just “Hi. My name is McKenzie and yes, I’m holding the semen of my husband.”  When a nurse finally called my name I had to use the restroom.  So I asked her to hold it for me. Her response, “I’m sorry but I can’t. I suggest sticking it in the middle of your bra so it stays warm and upright.”  WHAT…THE…HECK???!!!!! THIS IS GETTING WIERDER BY THE SECOND!  When I was back in the hospital room, the nurse explained that they can’t take the semen from me until they are ready to use it, for liability reasons. Oh… well, that makes sense… I’d probably be pretty upset if she dropped my husbands sperm while I was in the restroom. The next step was the insemination. The nurse uses a catheter to place the semen directly into my uterus. This part has been different each time and in my case, I think it depends on the nurse.  …Are you still wondering why I had to wait to get take Luke’s semen?  Yea, so was I.  After the nurse was done she instructed me to stay laying down for 15 minutes.  So I asked her about the “in-between” time of when my husband did his part, and I got the semen.  She explained to me that the semen is “washed” in the laboratory (called sperm processing). The sperm is separated from the other components of the semen and concentrated in a small volume. They keep the HIGHLY motile sperm for the procedure.  By placing the “best” sperm high in the uterus, the goal is to have more sperm get to the area in the fallopian tubes where they might have a successful meeting with the egg(s).

August 2, 2015 = IUI #2:  Awful. The nurse couldn’t find my cervix with the catheter and I almost passed out. She found it, thankfully.

September 30, 2015 = IUI #3: Not easy but not awful.  Tolerable. This nurse was very excited because “she could tell” I was definitely ovulating…

Luke and I weren’t prepared for the stress that comes along when we decide to go in for IUI. We both have good jobs and take pride in our careers.  Going in late to work? Uh, don’t want to! Not knowing more than one day in advance if we’ll be in late? Even worse!  How am I going to get out of that important meeting in the morning?  How is Luke going to show up 2 hours late to work with no explanation, but expect the guys he’s managing be on time? STRESSFUL.  Not to mention the timing of it all.. the timing is basically a crap shoot – maybe the IUI is done at the right time, maybe it’s slightly off, or maybe we totally missed it. Insemination is supposed to be timed to occur at or a little before the time an egg is released, which you really don’t know for a fact.  When I test for ovulation using an ovulation kit, the first “positive LH surge” means that I will release an egg anywhere between that moment and the next 36 hours… And even if we DO actually nail it on the head (timing wise) our chances of it actually working is just 8-10%. (gasp!) Yup, that’s it.  And yet still –  approximately 35 couples show up to our local hospital every single month to do IUI…

So, as you can tell, IUI isn’t a one and done procedure… it’s not a for sure thing.. it doesn’t necessarily make things easier… and it can be quite scary. And you prepare yourself, in your head, as much as you can, for every appointment and every test… but it’s never enough for any infertility appointment; whether it’s getting your blood taken, checking your “female parts”, making sure the male isn’t “shooting blanks”, etc… every appointment is hard.  Especially with each passing month that you aren’t pregnant.  But, like Dorothy in The Wizard of Oz, I continue to follow the road that the specialists instruct us to take, filled with scheduling… procedures… and stressing – in order to get where we want – which is, of course, to be blessed with the gift of parenthood. 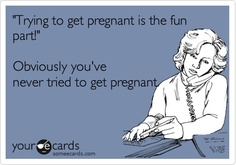